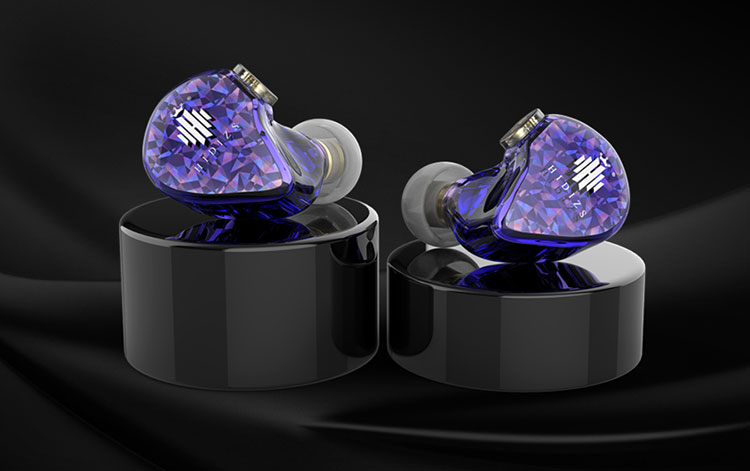 Most of our readers already know who Hidizs is far as who they are and what kind of gear they make and probably already own a piece or two of their gear, I do.

This latest Hidizs item we received for review is an IEM from their Mermaid line. This particular line carries a clue in the model number far as their internal driver configuration. For example, the MS1 is a single driver IEM and the MS4 is a hybrid 4 driver IEM. Well, you get the point.

So this next up Hidizs IEM on the spotlight is the MS2 which is a hybrid dual driver sub 100 dollar model that has a Hi-Res certification and conceptually implemented audiophile tuning. 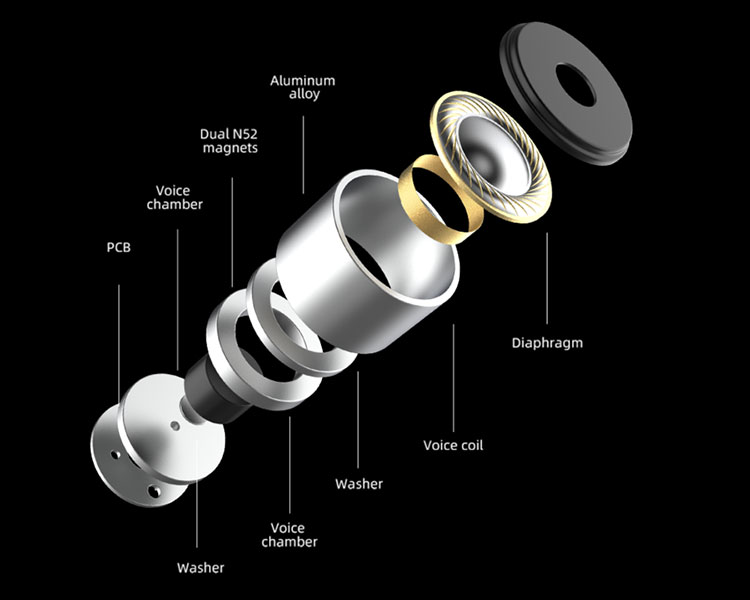 The first area of interest here is, of course, the IEM assembly and the internal components which consist of a 2 driver combo, a hybrid design, and tied together with a two-way circuit board on 0.78mm connectors.

The first driver is a Titanium coated Macromolecular composite diaphragm 10.2mm dynamic driver which is rather unique. Hidizs calls it a Dynamic Armature driver because the driver mechanism seems to reside inside some kind of a metal enclosure similar to a Balanced Armature.

These V2.0 drivers not only incorporate a dual-chamber design but the drivers also have a dual voice coil drive system which is rather upscale for a budget model if you asked me. 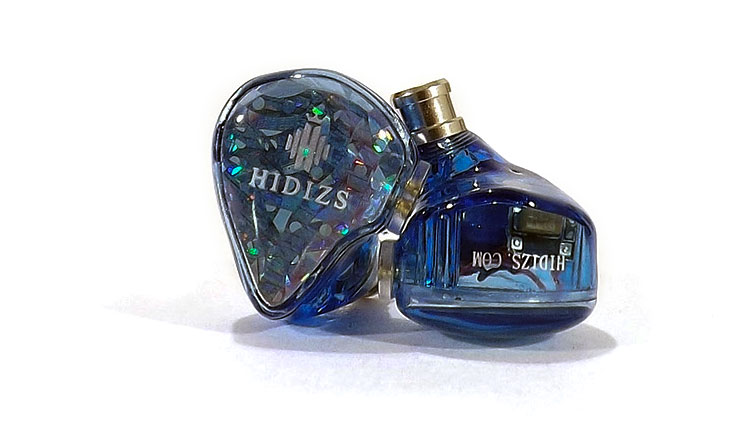 To keep it all together Hidizs uses German eco-friendly resin to construct the ergonomic fitting shells. The resin has a transparency that subtly shows off the internal components.

The faceplate has a phosphorescent rainbow design with reflective metallic shards along with the Hidizs logo in silver. These are quite good-looking.

By the way, I got the blue pair but in fact, the Mermaid MS2 comes in five different colors, Black, Red, Blue, Green, and Purple shades, so have fun picking a color because to me they all look rather good.

Comfort is somewhat above average. These IEM shells weigh about 5 grams each so they are not heavy or too bulky either and I expected that since the shell only has to hold two drivers plus a small micro crossover board.

The Mermaid MS2 comes with some white silicone tips that for some reason I could tolerate inside my ears for longer periods of time compared to other tips and they seem to have a non-irritating and anti-allergenic property.

External sound isolation is quite good also and these shut you off from most of the outside world passively. I would say they give you at least the overall IEM average 24dB reduction or probably even higher with the right tips. 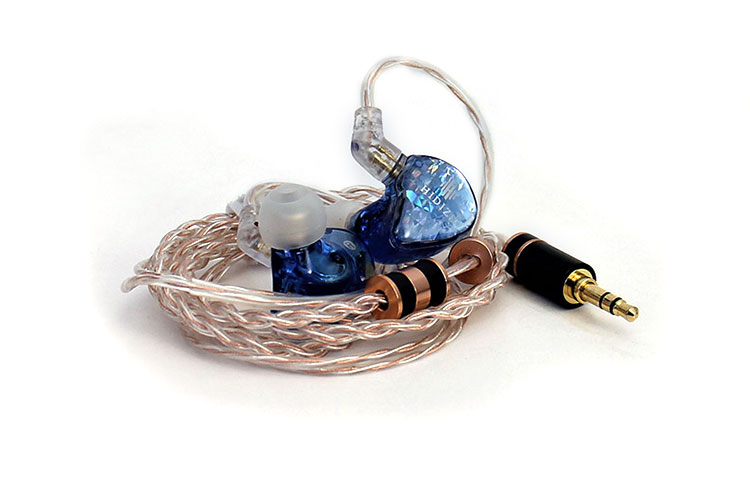 For a budget IEM model, the stock cable assembly is not that bad. Upon first look, you see a dual twisted wire set and a single wire above the Y split. My only gripe would be how thin the wire is.

The wire used to make the cable assembly is a high purity oxygen-free multi-core silver and a high content copper wire with transparent insulation. Hidizs chose a higher amount of copper inside the wire because they claim smoother, warmer sound over just a pure silver wire which enhances high frequencies.

The wire that was used is good quality, so is the 3.5mm gold plated plug and there’s not honestly much to brag about here but the hardware which is used is the best part of the wire in my opinion.

All the hardware is made of aluminum except for the 0.78mm connectors and all the pieces are finished in a matching matte black trim with rose gold. The piece at the Y split is also metal along with the matching length adjustment slider piece. 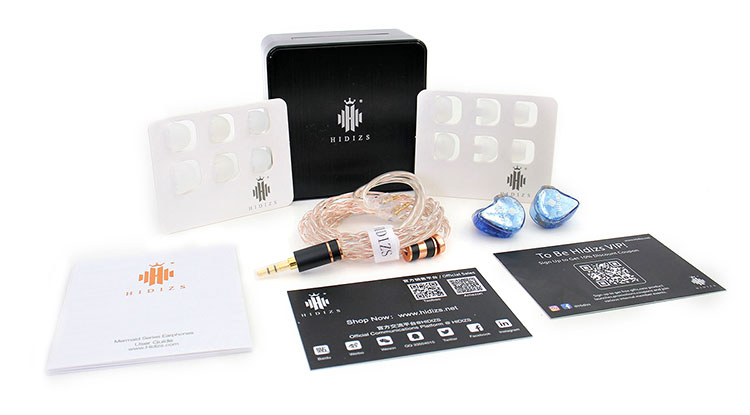 For a sub-$100 IEM, you also get a rather nice hard storage case which is topped with a black metal laminate and a full surrounding silica rubber inner shell to keep the IEMs scratch-free and safe inside.

The rest of the included accessories are an assortment of two types of white silicon tips that come in three sizes of each type and are not marked but to me, one gave me a more balanced mid-centric sound signature and the other gave me an increase in bass response. The latter would be the narrower bore tips.

You also get a standard owner’s manual with a couple of other pieces of literature. One is an authentication card along with an invitation card to the Hidizs VIP club which once you register entitles you to get discounts on future Hidizs product purchases.

I got a two-fold picture listening experience to the Mermaid MS2 at first because although they seem to be neutral and flat, you listen again, and your ears sort of settle in that they have a very slight U-shaped character.

There is a little steer in color and fun factor in the bass response and there is a small amount of elevation in the mid-bass area which resides around 50Hz to 100Hz which gives these IEMs a slight punchy character. I think the bass is this IEMs best character.

The midrange is somewhat smooth until you reach a couple of peaks I picked up out at 4k and one at 7k with the latter peak being the larger of the two peaks. There is also a sharp dip between those two peaks. I suspect this area is where the crossover point is.

The 7 kHz peak gives these a sharp edginess in the transition to the highs and also makes that area sound somewhat hot but if you use moderation with the volume there is a large area that is a sweet spot where these are very listenable to and the above does not occur.

The lower region digs deep and drops sharply and steeply but only once it reaches 18 Hz which at that frequency the bass was still totally audible and almost on par with the rest of the range all the way up to the 50 Hz region. Stock, the lower bass is rather flat but if you use a boost these can pump out some serious ear-tickling bass.

The slightly elevated area above 50Hz in the bass which is not a large hump gives these IEMs a bass present character which works really well with most modern urban music like EDM that is best heard with heavy bass capable IEMs.

In other words for the money, the bass response is very good. The bass digs deep, has some decent body and sounds clean with plenty of speed with a good amount of attack and fast decay. They are not natural bass hammers but it seems if tickled these drivers have lots of low-end grunt.

The transition into the midrange seems seamless since I believe both areas are produced from the same driver removing the need for a crossover point that could present undesirable peaks or dips.

The midrange response is somewhat smooth and polite and never seems too forward or intrusive to other frequencies. But because of the aforementioned peaks when you turn up the volume loud things can get edgy around that 4 to 7kHz area which is close to the crossover transition I think.

There is also a dip in between those two peaks which to me gives them an even more of that U-shaped character.  In combo with the small bass hump and since the midrange is right below the bass and treble in output, it makes it even more so.

Tonality is fairly accurate but there is a slight veil perhaps because of their midrange politeness that somewhat keeps output restrained but most times the midrange still remains rather detailed and presented with a small amount of body.

The Mermaid MS2 high frequencies do sound sharp and somewhat crisp but have a hint of this edginess and at times a slight metallic character at high volume levels which is absent on some custom BA drivers and high tier dynamic drivers.

Of course, I do not recommend extended periods of loud music and most people listen at moderate volume levels anyway so this is an issue that sort of solves itself out.

When the MS2 play music at low or moderate volume levels they shine in the highs department, literally. They can most times emit a nice amount of airiness and a crystalline character with lots of shimmer with a good sense of placement.

These MS2 IEMs can image very well and pan a sound accurately across the head precisely and sound could be placed anywhere along a side-to-side line. They even have some very good height projection.

Width is decent in size with everything in between is filled in well except for one area and that is the frontal depth which is the MS2 only staging weakness. Frontal staging seems flat and small compared to width and height.

Other than that it seems they can create medium-sized 3D panoramas on the left and right side but not in the center due to lack of depth so don’t expect much of a phantom center channel either. I basically call this dumbbell staging because all the weight is at the sides and remains flat in the middle.

The MS2 highs actually carry most of the imaging capabilities here which are presented in an airy fashion although the midrange section is not too bad either at its presentation of the staging panorama.